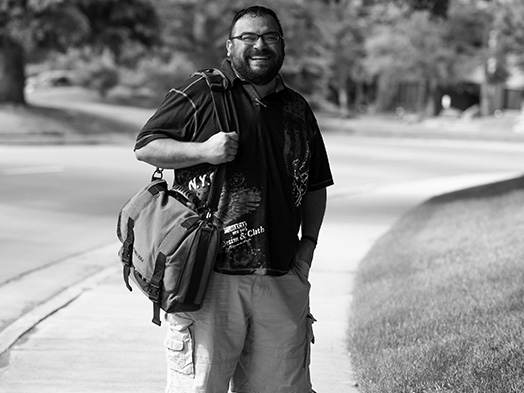 Fulfilling the intricate details comprising a system of a structure, captures the imagination of Miguel as he works at a mechanical and plumbing systems designer. After stints a few higher education institutions studying architecture as well and drafting and design for architectural, electrical, and mechanical design, Miguel brought his talents to the A/E/C industry to make buildings work. As part of helping a building grow from an idea into a reality, he loves to go into the field and see firsthand how his contribution evolves into a highly functional facility. With a “get it done” attitude, Miguel enjoys designing a system and integrating it into the whole design and making it work.

…Miguel? Attaching a GPS may be appropriate for this New Mexico native since his list of travels is long as it is diverse. From transversing The Land of the Midnight Sun to visiting Cape Canaveral to watch a rocket launch, Miguel’s desire to explore is immense. He’s also like to punch his ticket to see the Smithsonians in D.C. and hop on a plane destined for Italy where he’d take in Venice and Rome’s architecture and soak up the Mediterranean Sea.

It won’t take too long after meeting Miguel to uncover one of his secret loves– flying. It encapsulates many things that capture his imagination. From his chosen superpower to his favorite way of getting around, being in the sky is too cool for Miguel. It tops a bucket list item to own and fly an airplane and it’s the focal point of the coolest things he’s ever done – touched an F117 Nighthawk, the retired stealth fighter jet. It’s apropos that Miguel’s favorite movie quote from 1986’s Top Gun is, “I feel the need, the need for speed.

Head out to the garage to find Miguel working at one of his hobbies in his spare time – classic cars. Once he cleans up, there’s no telling what he’ll be doing from an intense love of drawing to painting, wood carving, building scale model, playing golf, fishing and camping. It won’t be a surprise either that he’d be hanging out with his son or watching the New York Giants play.

‹ Erin Pasold Return To Who We Are Wes Ploof ›